Books, TV, Music and Movies inspired by or filmed in Sri Lanka

Sri Lanka has inspired artists and has been the back drop for many movies, documentaries and television programs.

Science Fiction writer Sir Arthur C. Clarke described Sri Lanka as a “small universe” containing “as many variations of culture, scenery, and climate as some countries a dozen times its size.” He emigrated to Sri Lanka in 1956 and lived here until his death in 2008, even including Sri Lankan historical juxtaposition in some of his books such as The Fountain of Paradise.

Many of the locations here can be visited in a day trip from Jungle Tide. Get in touch with us today and we will help you to curate your perfect holiday!

We can arrange guided treks and tours to most locations mentioned on this page.

Just ask us when you make your booking! 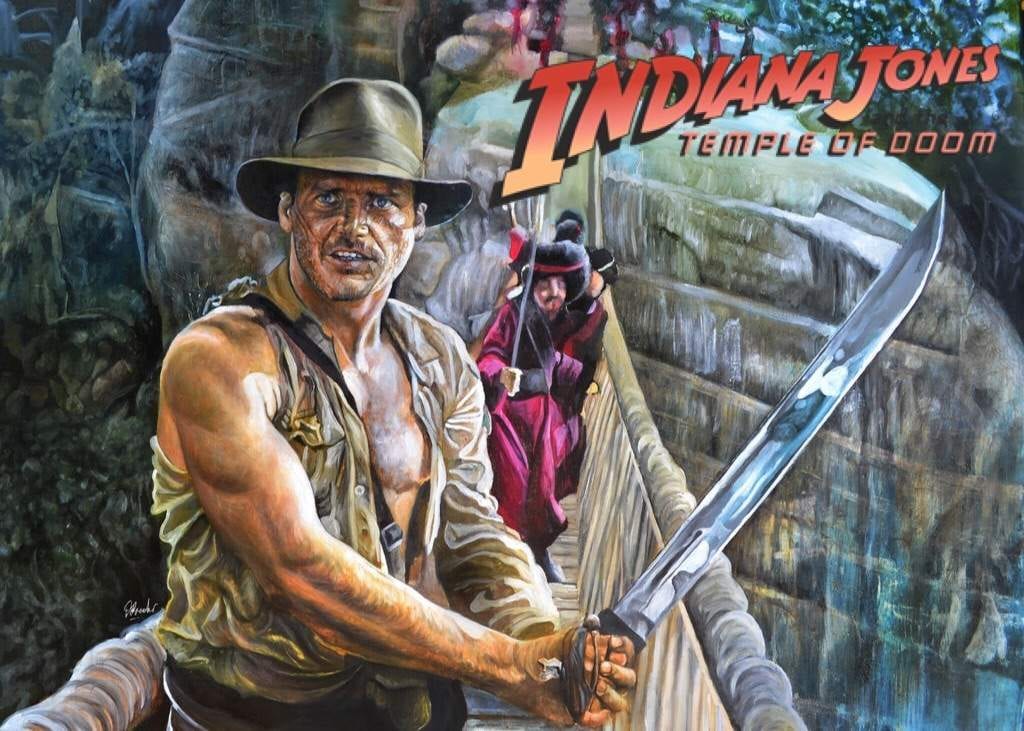 Indiana Jones and The Temple of Doom

Released in 1984, Indiana Jones and the Temple of Doom was directed by Steven Spielberg and starred Harrison Ford as “Indy”, an archaeologist /explorer/ saviour of the world.

The Temple of Doom was originally supposed to be filmed in Rajasthan in northern India, but permission was denied because Indian government found the script too offensive. Instead, Spielberg relocated much of the filming to Kandy and its surrounding areas in 1983.

‘Mayapore’ village was built on the grounds of the government-owned Hantana Tea Estate and Plantation, 7.5kms from Jungle Tide on the road to Kandy. There are multiple filming locations across the estate, and you can also search for the ‘Sankara Stone Shrine’ hidden in the undergrowth.

A superb website guide to the locations in Hanthana with photos showing the film and the location can be found here.

The infamous rope-bridge in the film was built across a 300 foot-deep gorge a few hundred metres downriver from the Victoria Dam, north of Kandy. As the dam was still under construction, there was a convenient supply of engineers and equipment to string the bridge.

The elephant ride to the ‘Palace of Pankot’ makes use of the Pinnawala Elephant Orphanage. Established in 1975 as an orphanage, nursery and captive breeding ground for wild Asian elephants, and with over 60 elephants, Pinnawala boasts the largest captive herd in the world. Some people have concerns about animal welfare in relation to the Elephant Orphanage; we suggest you look online and judge for yourself whether this is a place you are happy to visit. 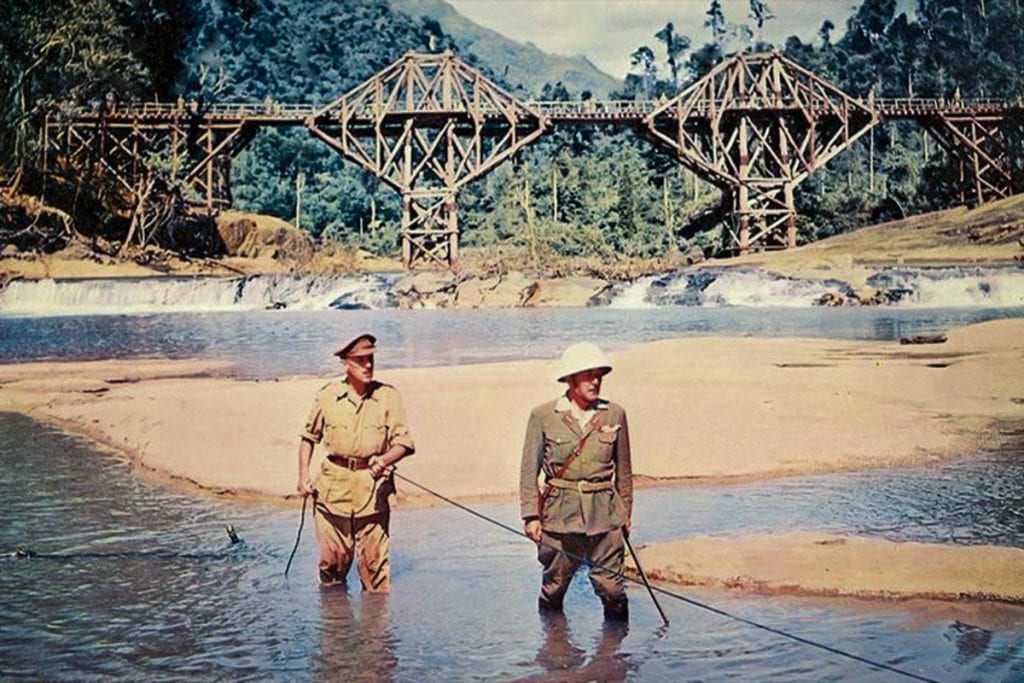 The Bridge over the river Kwai

Much was filmed in Kitulgala on the western edge of Sri Lanka’s Hill Country and can be visited in a day trip from Jungle Tide. In addition scenes were shot along the Maskeliya Oya and Peradeniya Botanical Gardens **link to gardens from day trips from JT page**, a short drive and highly recommended day trip from JT.

Today, Kitulgala is known more for white water rafting, trekking through the jungle and bird watching than for being on the big screen, though you can still visit the site of filming through a jungle trail. Kitugala is another easy day trip from Jungle Tide. 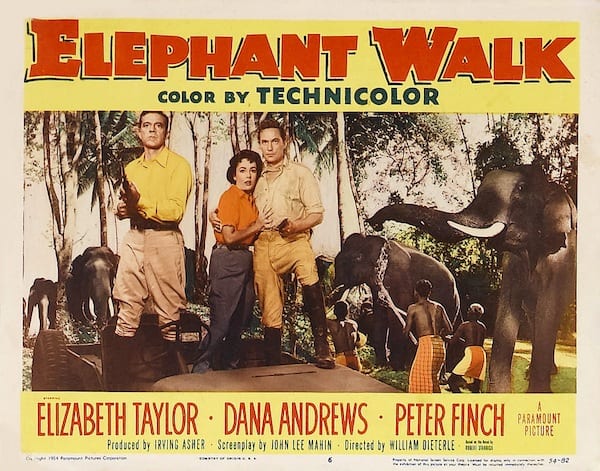 While most of the movie was shot on the West Coast near Bentota, many scenes were also shot locally. Of particular note is the Oodewella Tea Factory on the road to Jungle Tide.

To visit the house and grounds today that Elizabeth Taylor ruled in the movie as the plantation matriarch requires a trip to Brief Gardens. They can be found in Kalawila village near Bentota on the South West coast.

Released in 1981, Tarzan The Ape Man, is a remake of the legendary 1932 film of the same name. The 1981 version was largely filmed in different parts of Sri Lanka’s Hill Country. One location of note near Jungle Tide is Bahirawakanda hill upon which a huge Buddhist statue resides overlooking Kandy.

The second in the Jungle Book series that was adapted for the big screen, Mowgli and Baloo was mostly filmed at the Udawatte Kele Sanctuary, a forest park just outside of central Kandy.

Both locations can be visited from Jungle Tide on a day trip to Kandy...

The popular documentary narrated by Tina Fey is about a family of monkeys living in ancient ruins found in the jungles of Polonnaruwa. The film was released by Disneynature in 2015.

Polonnaruwa is an overnight tour from Jungle Tide, we are happy to arrange this trip for you with an experienced guide, just ask!

Their song Madame Helga was inspired by their stay at Helga’s Folly, a hotel in Kandy, and written about the owner Helga de Silva. A renowned retreat for artists and celebs alike, Helga’s Folly is a surrealist inspired hotel that remains quirky to this day.

The band filmed 3 music videos in Sri Lanka in the 1980s! Hungry like the wolf, Save a Prayer, and Lonely in your Nightmare were filmed in Colombo, Galle, and the cultural triangle north of Kandy.

The Big Bang Theory – the episode where Sheldon falls asleep in a bus and wakes up in Little Sri Lanka where he is fed mutton curry with coconut milk and regaled with some (inaccurate) stories of witch doctors and tigers.

Modern Family – in one episode a teacher Cam regards as a nemesis returns from a sabbatical in Sri Lanka, complete with dance moves and gifts from Anuradhapura!

Covert Affairs – American TV drama which begins with the lead character backpacking around Sri Lanka and meeting her love interest in Unawatuna!

30 Rock – in one of Jack’s outbursts about loving the earth he mentions Kadupul flowers he has flown in from Sri Lanka.

South Park – in the second season there is an episode called ‘The Mexican Staring Frog of Southern Sri Lanka’!